Is That Love Gains 6th Success This Season

Our apprentice jockey Cian McRedmond lost his 7lb claim today while claiming honours in the Kevin McManus Bookmakers Handicap at Listowel for the Mark Devlin, Gary Devlin & Joseph McCrory-owned Is That Love. Purchased by Shamrock Thoroughbreds for 11,000gns at Tattersalls October 2019 Sales, this was the Es Que Love gelding’s sixth success this season.

From the outset, he was ridden prominently and travelled smoothly in 3rd throughout before entering the straight where Cian made his move entering the final furlong where he quickly asserted and stayed on well to win by 2 and half lengths from the Garvan Donnelly trained Earls.

Ado stated afterwards, “I’d like to dedicate this win to the late Donie Sheahan who has been a great friend of mine down through the years. I would always meet him at the Summer festival in Killarney or down here in Listowel. He was a great racing man and a great GAA man also. He’ll be missed by many and my condolences go out to his family and many friends.

I nearly have to thank Gary O’Gorman for this win today as he put him up 4lb for being third the other day so I was forced to run him today. I saw the ground was a little dead but I knew he’d like it. Cian gave him a super ride, he’s lost his 7lb claim now. He was very good on him, very patient, so fair play to him.

He’s in Barney Curley’s race next week at Bellewstown so he might rock up there too. I don’t know what weight he’ll have to carry there but he’s entered in it. If he doesn’t run there he’ll get a break.

That’s his sixth win of the year so he’s done well. Last year we were going to bin him so it just goes to show you what some of them do, he’s just turned around.

He’s a good fun horse and has been great craic for the lads”. 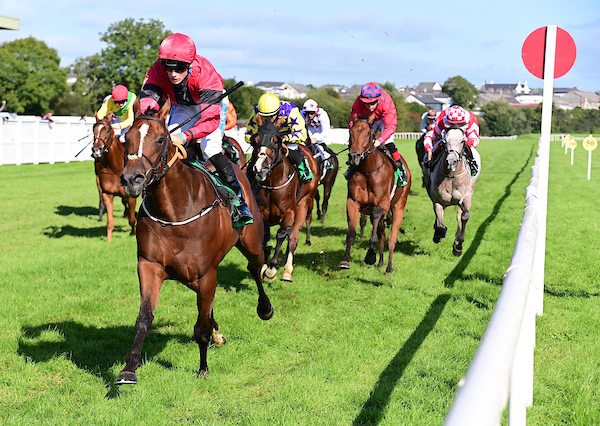