Is That Love completes Hat-Trick

Is That Love, defying a 6lb penalty for his Fairyhouse win last Friday, completed his hat-trick by winning the Tulsk Apprentice Handicap at Roscommon under Cian McRedmond, making it his 5th win for the Es Que Love gelding for owners Mark Devlin, Gary Devlin & Joseph McCrory this season.

Despite being drawn out wide, Is That Love broke well from the stalls & tracked the early leader Summer’s Dream. Cian made his challenge just over 2 furlongs out to lead and kept on well in the run-in to win by a half a length from the aforementioned Timothy Doyle runner.

Ado stated afterwards, “We had to run him again as he was 7lb well in. He’s done it well from a wide draw & Cian was excellent on him. He was very composed & he didn’t panic. The horse is improving and he’s going to go up in the ratings again. We’ll just take our time with him and find something else for him in the coming weeks” 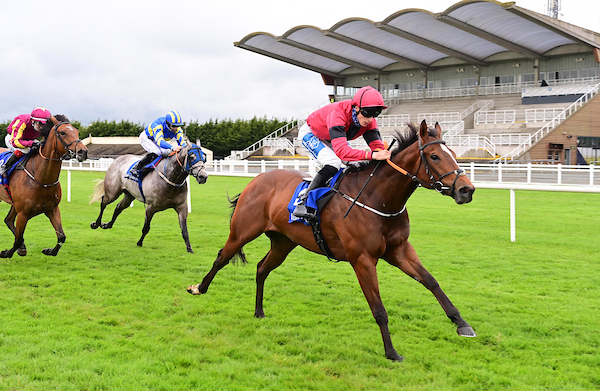