Hightimeyouwon Off The Mark In Dundalk

The Garswood gelding, who was having his third run for his new connections following his £18,000 purchase at Tattersalls UK August Sale, was kept in rear of mid-division by Cian in the early stages with a fast pace set by early leader Hypernova.

When they turned for home, Cian moved his mount to the outside to challenge the early protagonists entering the 2 furlong marker and then swooped by in the final furlong staying on well to beat fast finishing stablemate Hodd’s Girl by three quarters of a length.

Speaking afterwards, Ado said, “We were drawn very wide which was a real killer, so we put a visor on him to try and make him go forward early doors, which did help & I think that’s what won it for him.

He’s a huge big horse, a smashing horse, and I’d say he’ll be better on the turf. We were trying to get a win with him because he had run so well.

I’d usually give him a little break about this time and he’ll probably go on a break now. We might look at the all-weather finals in Lingfield, there is a good pot there, or maybe wait for the grass.

He was a cheap horse at the sales, his form was there but he had lost it. He was quite disappointing last year and we said he was a horse worth taking a punt on. He wasn’t overly expensive compared to what you usually have to pay for them. He was second in a Bold Lad on Champions Weekend and won a good pot down in Cork.

I am also delighted also for Shamrock Thoroughbreds’ biggest supporter, The Harold House. They have been involved since the start of the syndicate 5 years back and this win today has been their 42nd winner.” 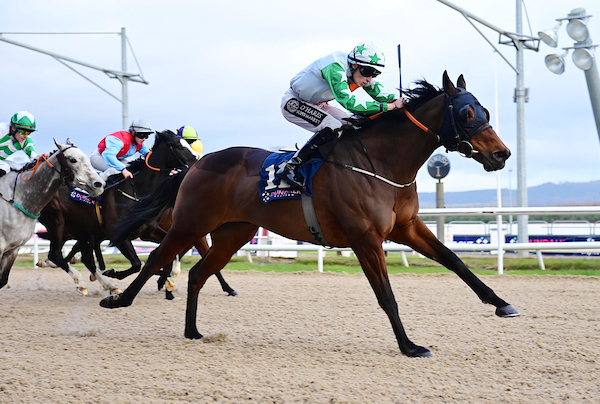