Hodd’s Girl landed her fourth victory for the yard last Friday night in Dundalk when powering home in the final furlong to win the Join On Instagram @dundalk_stadium Handicap under stable apprentice Adam Caffrey.

The Zebedee filly was held up early on before Adam asked her for an effort entering into the straight where she responded immediately to take the lead at the furlong pole and she stayed on strongly to win by two and a half lengths from the Patrick Martin trained Gobi Star.
Speaking afterwards, Ado said, “She’s a great filly and she’s a lovely filly to train. She is just improving and improving.

Adam was very good on her too today, he didn’t panic. They went good and quick, so he just sat there and that is the beauty about him.

I’m delighted for the lads, I think that is her fourth win since she came to me.

We’ll probably try and get a bit of black-type with her now. She did that very easily tonight. She deserves a shot at a good pot somewhere and that is what she will get. We might look at the all-weather finals, I think the likes of Newcastle would suit her because they will go very, very fast and the race is inclined to collapse. She is a very strong traveller”.

The first half of the double was landed earlier when Real Appeal claimed the Story Of Dundalk Stadium Book Race for owners Shamrock Thoroughbreds, Dooley Thoroughbreds & J P Cleary.

Having been easy to back in betting, the recently acquired Sidestep gelding from the Jessica Harrington yard raced in rear throughout before Adam made his move to catch the front running San Andreas in the final furlong to win comfortably by a length and a quarter.

Afterwards, Ado said, “We have him entered in Doha and that is where we are probably going to go. Fingers crossed he will get in there, there is a big pot of money in the Middle East and we are going to chase it if we can.

We had him up here once before and he was very good, he travelled very sweetly when we did a half-speed on him two weeks ago. He really enjoyed it and took to it very well.

Adam was very good on him and he gave him a very patient ride. He was excellent on him. He was very cool and didn’t panic, good jockeys don’t panic. Shane Foley had a chat with him, that’s what all these boys do.

He ran in the Breeders’ Cup, so he is a very high-class horse and a Group 2 and Group 3 winner here in Ireland. We will target Group 2s and Group 3s this season with him”. 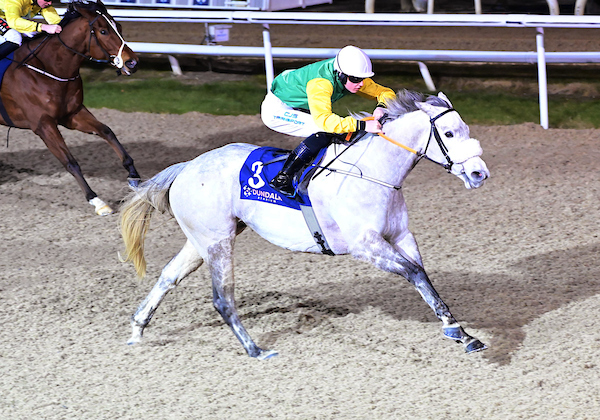