It was a case of double delight last Wednesday (23rd March) for our syndicate Shamrock Thoroughbreds at Dundalk as both Harry’s Bar and Form Of Praise both took honours at the Louth venue.

The 7yo Exceed And Excel gelding who needed the run to qualify for the AW Championships at Newcastle next month was held up early on but took closer orders entering the straight travelling well under Cian McRedmond when he then pushed him out entering the final furlong to lead and win by half a length from the James McAuley trained Ajax Tavern.

Speaking afterwards, Stephen Thorne said “Cian gave him a great ride. I think that’s Cian’s first one for the year but we have held back his claim with the turf in mind. He’s a very good rider and we are blessed to have him.

This horse is just off the plane from Dubai and had a luckless trip out there but he is an all-weather specialist. Ado’s daughter has been looking after him since he came home and keeping him fresh. She has done a great job with him.

We’ve got the conditions race at Newcastle on Good Friday as the main plan”.

The double prevailed later on in the card for the same jockey/owner duo as Form Of Praise got up late to win the Book Online @ DundalkStadium.com Handicap.

Speaking afterwards, Stephen Thorne said, “She’s a tough filly. We let Satin Snake get first run on us here the last night and we were happy to be a bit more forward. We changed tactics and it worked. The cheekpieces definitely helped her.

Michael Doyle and Alice Fitzgerald are big part-owners in this horse, they bred the filly and I’m delighted for them.” 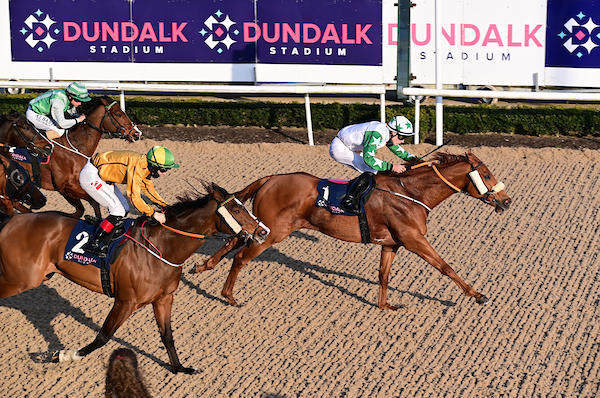 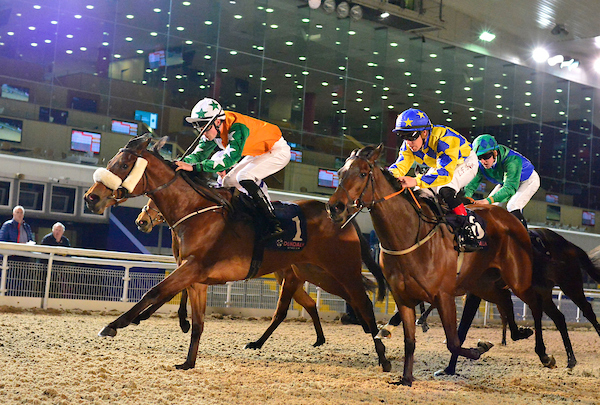