Current Option successfully defended his crown in the Irish Stallion Farms EBF Ahonoora Handicap on Sunday at Galway under our apprentice Cian McRedmond.

The Camelot five-year-old was a narrow victor of the €100,000 contest 12 months ago, before going on to win at Listed & Group 3 level by the end of the season.

There was drama from the outset when Archie Watson’s Stone Soldier unseated his jockey after the stalls opened. The loose horse then caused trouble rounding the home turn, impeding our stablemates Current Option & Spanish Tenor.

However, Cian managed to get his mount to pick up well to win by half a length from the closing On A Session.

Spanish Tenor finished 3rd, Sirjack Thomas 4th and Laugh A Minute 6th, to round off an excellent result for the team.

Afterwards Ado said, “I fancied him, because I thought he was the class horse in the race.

He ran well the other night when Cian got blocked in. I love when you drop these Group horses back into handicaps like that.

He’s proved that he’s a very good horse.
Of course we got a big scare up the hill with the loose horse but it worked out great. We had four runners in the first six, and I can’t believe it.

We’ll probably go to the Listed Platinum Stakes race next week in Cork, because he won’t carry a penalty. We did it last year. So if all goes well, we’ll do it again and then give him a break.” 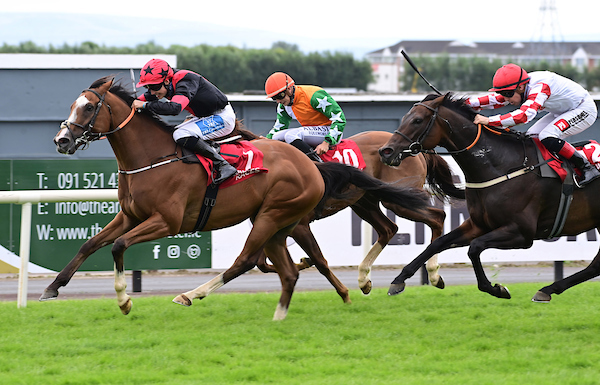