Having travelled prominently throughout, he made easy work of his opposition when asked and he coasted to victory to win by 2 and a quarter lengths from the Michael O’Callaghan trained Chavajod.
Speaking afterwards, Ado said, “He’s a good horse and he was well down on his turf rating. He’s back to form and he likes good ground.

He had a cracking run behind Harry’s Bar in Dundalk, he’s a good horse on his day and he will go back to Dundalk. Patrick was very good on him.

It is great for the lads and he ran in Bart O’Sullivan’s colours today. Bart was a great supporter of ours and unfortunately his son James couldn’t be here today, but they are still our yard sponsors”.

Half an hour later, Cordouan made it a quickfire double for the same trainer/jockey combination as he landed the Gilna´s Cottage Inn (Q.R.) Race on his first start for owners Dooley Thoroughbreds.
Ridden patiently early on, Patrick made his move when travelling well just over 2 furlongs out to lead entering the final furlong and while he showed some signs of greenness following a 17 month layoff, he managed to hold off the challenge of favourite Alessandro Algardi to win by a short head.
Speaking afterwards, Ado said, “He’s a lightly raced horse we sourced at the Tattersalls July Sale. He wandered a little bit when he hit the front but should come on a lot for it. We’ll target some of the big premier handicaps with him next season”. 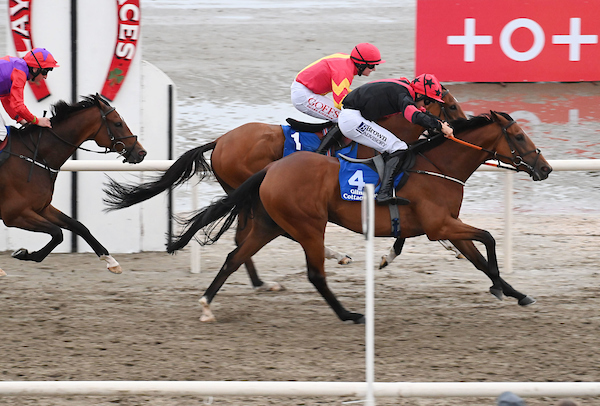